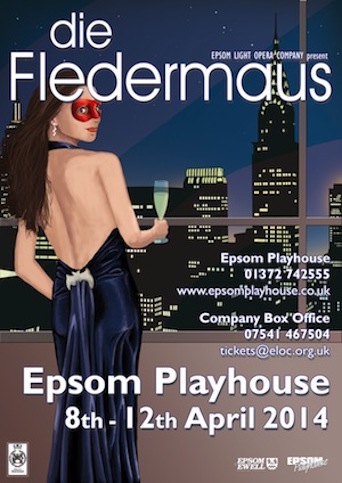 at the Epsom Playhouse
Spring 2014

Die Fledermaus set in the present is an interesting and challenging concept for any company to take on. This modern version with altered libretto by director Christopher Moon-Little was certainly different from the traditional one. So, did it work? Well yes, in some respects but there were several things not to like.

The singing, acting and characterisations of all the principals was of a very high order indeed. With three exceptions (Dr Blind, Franck and Grolsch) all were newly trained (or training) professionals.

This tuneful operetta opened with a giant computer screen showing a video of the prank Eisenstein played on his drunken and sleeping friend Falke. I thought this idea, though clever, was rather laboured, however it certainly ensured the audience that the production was set in the present time. I noted a couple of topical references during the show. The opening set and scene in Eisenstein's apartment was kept sensibly minimal which focused the attention on the various deceptions going on amongst the actors.

For my money, the highlight of this act was the appearance of Rosalinde's lover, Alfred and his attempt to seduce her. His superman shorts would have made Edwardian ladies faint! He was the most charismatic actor on stage with a stunning voice. Not far behind, however, was Adele - her famous laughter song in Act 2 was spine tingling.

The famous ballroom scene, now a nightclub bar room, was in many ways let down by the modern setting. A simple bar at a party and an eclectic mix of party goers including Ali G lookalike did not do justice to the masked ball traditionally used. I suppose that is the penalty paid for updating the show.

There was some interesting choreography in this act which was rather well set and carried out by the company under choreographer Amy Hamlen. It did however lack elegance when compared to this scene in the original setting. Energy is not a good substitute for grace. Adele's laughing song was beautifully performed and Rosalinde's charade as a Hungarian Countess were for me the highlight of this act, along with the glorious singing generally.

Act 3 set in the prison governor's office was in some ways lacking in the natural comedic business, bordering on farce, that the original plot demands with the various comings and goings as the complicated plot is finally resolved. It was perhaps over simplified. The comedy involving a lengthy scene where Grolsch becomes convincingly drunk eventually became rather laboured. The blow-up doll made me laugh initially, but a lighter touch with comedy is essential. Unfortunately the "reluctant" doll turned the scene into slapstick. Falke's appearance with the company from the party was handled with aplomb and the finale was also worthy of praise.

The orchestra under the sure command of musical director Dennis Hooker underpinned and supported the gorgeous singing in this show most effectively, whilst never drowning the soloists. Lighting designer Simon Banks and operators David Titman and Kevin Ward were to be commended.

Costumes by Kris Benjafield (the programme misspelled her surname) and Caron Ireland were appropriate for the modern setting.

Overall this was an enjoyable show and for a famous operetta such as this, it was prudent to use professional soloists in the main parts. However the modern setting could not quite match the atmosphere and some of the humour of the original by Johann Strauss II.