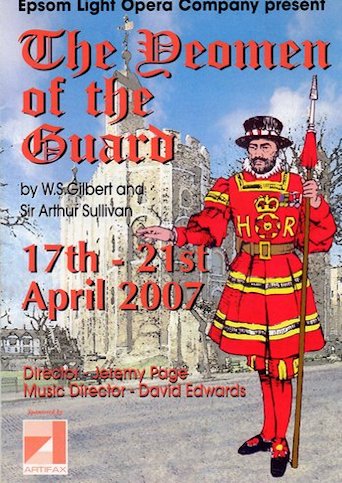 At the Epsom Playhouse
Spring 2007

Gilbert & Sullivan's works seem to bring out the best in directors and choreographers. On the face of it these fanciful operettas, now well over a hundred years old, have little to say to 21st century audiences yet they constantly come up fresh thanks to the imagination artistic teams bring to them.

The enduring appeal of 'The Yeomen of the Guard' was underlined in ELOC's recent production, directed by Jeremy Page.

Of course, a talented cast helps; all the key parts had been carefully cast and then well honed in rehearsal.

The most striking performance was given by Peter Calver in the pivotal role of Jack Point, arguably G & S's only tragic character. The actor showed all the agility expected of an itinerant jester, coupled with a fine singing voice. His acting, sense of timing and body language were worthy of a far more serious play than this.

Kate Palmer, as Phoebe, showed every emotion through her facial expressions - frivolity, disdain and revulsion were all there, right through to the curtain call. She skipped flirtatiously and sang clearly in Were I thy bride, having, earlier, been severely hampered by untypically poor sound control in her opening number When maiden loves. Indeed, the evening only came fully to life after this stuttering start, with Charlotte Collier's impassioned When our gallant Norman foes. She was supported in this song by the yeomen themselves, several sporting convincingly natural-looking beards.

With long greasy hair, blacked out teeth and leering looks, Chris Watkins made the most of the show's best character role, Shadbolt, the jailer and tormentor.

Gavin Sayers epitomised the brave, honourable Fairfax, taking the spotlight with Is life a boon and, later, equally impressively with Free from his fetters grim.

These actors, together with Nic Ash (Sergeant Meryll) and Anne Mitchell (Elsie) combined variously for the numerous duets, trios and quartets sprinkled throughout the show. Only Strange adventure, in which they were joined by Felicity North (Kate), was less than ideally balanced.

Lighting was distracting in places. A perfectly well-lit scene could suddenly, inexplicably, go dark to focus unnecessarily dramatically on a soloist and the designer seemed to find it necessary to change tints several times in some episodes. However, the strobe lighting sequence as Point became distraught at losing Elsie added an original touch.

The ensemble, which gave fine support throughout, made its mark particularly strongly in the finales to both acts. The meticulously built scene leading to Fairfax's 'execution' was a highlight.

Helen Parker and Kate Rendall's choreography always matched the mood of the moment and grouping was equally eye-catching. Productions such as this prove that G & S still has a long life ahead.

The Yeomen of The Guard is the closest Gilbert and Sullivan came to Grand Opera and it's fair to say that this was a very grand production of one of their lesser performed works. Filling the Epsom stage is not easy – but your magnificent set looked made to measure and gave a stunning first impression to the audience. There may have been technical reasons but I wonder whether if would have not created even more of a first impression if the house tabs and been kept closed at the start of the show ?

The overture of around seven minutes was expertly played by your band under the leadership of musical director David Edwards. Unfortunately, on the evening I attended, the sound quality was poor during both the overture and opening solo with the band far too overpowering. Fortunately, this problem was rectified for the remainder of the performance.

Kate Palmer (Phoebe Meryll) sang the opening When Maiden Loves She Sits And Sighs well and later in the act, her interpretation of Were I Thy Bride was sweetly performed. Charlotte Collier (Dame Carruthers) handled her songs well – with a nice lower register. Gavin Sayers gave an excellent portrayal of Colonel Fairfax and his Is Life A Boon? was particularly strong.

Nic Ash played Sergeant Meryll with plenty of flair and style and combined well with Ziggy Szafranski (Leonard Meryll) and Kate in Alas! I Waver To And Fro. Ian Lambert gave a confident portrayal of Sir Richard Cholmondley.

The beautiful I Have A Song To Sing, O was extremely well performed by both Anne Mitchell (Elsie Maynard) and Peter Calver (Jack Point) – who both impressed throughout the show.

The end of Act One saw some excellent ensemble singing, which continued through to the opening of Act Two when the set was particularly well lit.

Peter Calver and Chris Watkins (Wilfred Shadbolt) both worked well together and their duet Hereupon We're Both Agreed was well performed as was Fairfax's solo which followed – Free From His Fetters Grim.

The strobe lighting added to the drama of the finale – when again the whole ensemble were seen to good effect.

Dialogue was generally all handled well – though on an overall level I thought it could have been a little more pacey in places.

Choreography was very effectively produced by your co-choreographers Helen Parker and Kate Rendall – well done to them both.

Costumes throughout (and especially the Yeomen Guards) were all to a high quality as was make-up.

The programme was nicely presented, well supported by advertisers and I liked the illustration on the cover. The addition of a short synopsis is something you might consider for future productions. There also appeared to be a few names missing – including the members of the band and sound designer / operator, and a warning that strobe lighting was to be used during the performance.

Congratulations to your director Jeremy Page on a thoroughly enjoyable production of a challenging show.

Thank you for inviting me and for the hospitality on the evening. I greatly look forward to seeing your next production – Oklahoma! and wish you the best of luck with forthcoming rehearsals.