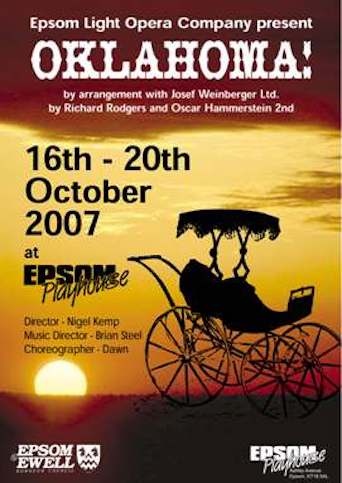 At the Epsom Playhouse
Autumn 2007

It has been said that Oklahoma, first staged 60 years ago, set a new trend for the opening of American musicals, no chorus, just a solo character. An idea incidentally used by Mr. Gilbert some 60 years earlier in Yeoman.

The play opens with Aunt Eller sitting in front of her farmhouse churning butter; in walks Curly singing about it being a Wonderful Morning. James Turnbull made a superb Curly, hair beautifully curled, a cowboy way out West in leather chaps and a six gun on his hip. A rather pale cowboy, as indeed were several of the men, whose tough life herding cattle hadn't given them a tan. His wonderful voice made every song a joy to listen to, an ideal romantic role as he courts Laurey, Aunt Eller's niece. Later he describes how he will take her out in The Surrey With The Fringe On Top.

Melissa Usher as Laurey paired well with Curly and married to him in the end. There was a good performance from all the ladies in Many A New Day. Julie Parker provided good continuity to the play as Aunt Eller the slightly elder townswoman, respected by all.

Curly's rival is Aunt Eller's farm hand, Jud, a morose, bitter character brilliantly portrayed by Andy Robson. In the final scene he attacks Curly with a knife, trips and falls on the blade and dies, a very well staged fight.

Melissa Cox as Laurey's friend Ado Annie, absolutely sparkled as Will Parker's "on off" girl friend, with her father (Nic Ash) very keen to get her married off – even to travelling salesman Ali Hakim. Colin Wolrich was the pedlar going from to town to town with his carpet bag of trinkets. Although there were references to having come from Persia, the accent was rather more Germanic than Arabic!

Throughout the American accents were excellent, though Greg Ludovici (Will Parker), who is from Connecticut, was asked to tone his down in case the audiences couldn't understand him. Great acting, very agile and a fine rendition of how he'd just come back from the joys of Kansas City.

This is a musical with vast sections of dance routines and Dawn, the Choreographer, did a wonderful job in getting the entire cast perfect in their steps. The Dream sequence, when Laurey dreams of what her life might be, had Kate Rendall as her dream personification. The Musical direction by Brian Steel was excellent and due to good sound control never swamped the singers.

Back stage, Sarah Wood had drilled her crew to make the scene changes without any lighting and so swiftly that in the few moments of total blackout, we were transported from farms to railways and open country without a pause in the music.

Nigel Kemp must be congratulated on a first class production, which on the Wednesday night, was attended by the Mayor of Epsom, Councillor Jean Steer and her Escort, Margaret Angus, together with other dignitaries for the Company's "President's Night".

Getting the timing right with a production of Oklahoma! is pretty important, so many groups over the years have staged the Rodgers & Hammerstein classic tale – but you fortunately managed to pick a time when it was not competing with other local groups. Hopefully, this factor contributed to the good box office you appeared to enjoy - which of course is so crucial when using a venue such as the Epsom Playhouse.

Oklahoma! was Rodgers and Hammerstein's first collaboration – and probably their best known work. That said, in terms of plot it is probably the thinnest – not having the war backdrop of South Pacific, or the deeper issues at play in Carousel, for example. It is also a very long show and so many groups tend to make cuts – It's A Scandal! It's An Outrage is often a number that gets pruned. Being something of a traditionalist when it comes to Rodgers & Hammerstein – I am pleased you appear to have kept faithful with the original material – although the overture was shortened quite significantly.

The quality of the music throughout was excellent under the direction of Brian Steel. Unfortunately the names of the band did not appear in the programme but well done to you all. I did feel though, on a note of sound that the volume could have been louder for the opening overture which would have created a more impactful opening.

James Turnbull as Curly gave a strong opening rendition of Oh What A Beautiful Mornin' on a bright and authentic set and backcloth which looked good without being fussy.

The opening dialogue between Curly, Melissa Usher as Laurey and Julie Parker as Aunt Eller was all very competently handled. Laurey conveyed the right levels of shyness and nerves and Aunt Eller made the most of her comedy lines including "she likes you".

The Surrey With The Fringe On The Top – was sung strongly by Curley and Laurey and looked great.

Greg Ludovici sang Kansas City well as Will Parker and moved well – but generally I felt the performance was a little under-energised. It wasn't clear from the programme notes about Greg's previous experience but I am sure he will have gained so much more stage experience as a result of this role.

Melissa Cox made a confident Ado Annie and her I Can't Say No was well sung and performed.

I wasn't sure that the off-stage conversation between Ali Hakim and Aunt Eller worked that well, particularly as there was already a conversation going on – on the stage.

Colin Wolrich worked hard as the peddler man Ali Hakim – although his accent became more German than Persian in places. He nevertheless conveyed much of the humour and mischievousness that comes with the role.

The ensemble work in Act 1 generally needed more reaction and energy – although this did improve significantly as the show went on.

Both Many A New Day and It's A Scandal were well performed and choreographed.

People Will Say We're In Love was sang well – but unfortunately there was significant radio mic interference during this number.

The smoke house set worked very well and both Curly and Andy Robson as Jud Fry combined well to sing Pore Jud Is Dead and then Lonely Room by Jud.

The Dream Sequence made a pleasing end to Act 1 – the soloists involved in Out Of My Dreams sang very well and Kate Rendall performed the dance part of Dream Laurey with confidence.

The ensemble really came to life in Act 2 – and The Farmer And The Cowman was a highlight of the show with plenty of good movement and singing. The hanging basket lights on the set also looked great.

The auction scene (which can drag) was done very well – the dialogue confidently handled and Aunt Eller controlling proceedings with plenty of authority.

Costumes generally were excellent throughout the show, although I did feel that Jud needed something more ragged and rough in Act 2.

The dialogue before and singing of People Will Say We're In Love (reprise) was very enjoyable.

The harmonies to Oklahoma seemed to get off to a slightly shaky start but finished strongly and the lighting was particularly effective during this number especially on the final freeze. The fight scenes were very well performed and the carriage at the end made for a very colourful finale.

There were plenty of strong supporting performances – with special mention to Nic Ash as Andrew Carnes, Charlie Hoddell as the suitably annoying Gertie Cummings and Steve Cox and Gareth Thomas as Ike and Cord respectively.

The programme was nicely produced – I liked the cover illustration - although at £2 – this was priced at the higher end compared to other groups. The listing of other groups in the area and their forthcoming shows is an excellent innovation – and hopefully all other groups mentioned will reciprocate.

Congratulations to all your considerable backstage team of helpers – and special thanks of course to your director Nigel Kemp and choreographer Dawn – for a most enjoyable production that was both in keeping with the tradition of the show – but also had plenty of pace and colour.

Many thanks for your kind invitation and I look forward to seeing your next production – Godfather's Gondoliers in April 2008.