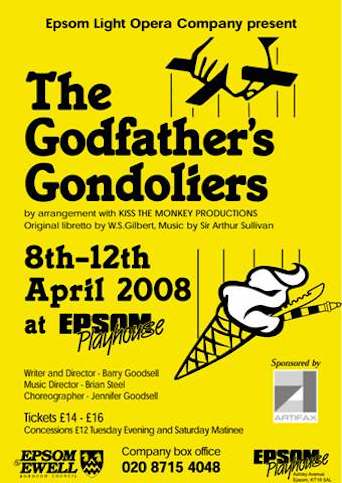 At the Epsom Playhouse
Spring 2008

This was my first experience of The Godfather's Gondoliers – but given this was only the third ever production – no great surprises there !

Firstly, you should be commended for producing something different – particularly in the current climate when the older, more perennial shows could be viewed as 'safer' options. There was a good house on the night I attended and hopefully this was repeated throughout the run and proved a commercial success for you.

Producing more modern versions of G&S shows has been most notably achieved with Hot Mikado – and it was intriguing to see The Gondoliers undergo a similar transformation under your writer and director Barry Goodsell.

Right from the opening scenes it was clear that this was going to be a fun and lively production. The (rather well staffed !) rival cafes opened up for business and there was plenty of humour including the two cafes trying to out do each other with ever larger pepper mills. Great props there.

The introduction was nicely performed – full of colour and energy with a simple but effective set that worked well and some good ensemble work in evidence . The roses added colour and there was nice movement.

We were also introduced to the central characters – Marco Palmieri confidently played by Peter Calver and Giuseppe Palmieri who was played by Mark Penrose. The pair worked well together and exploited the humour in their respective parts.

Their respective partners were Carbonara played by Sarah Higginbotham and Calamari played by Kirsty Stephen – both girls acted and sang well.

The mafia interest was supplied in the shape of Chris Watkins as The Don, Didrik Finne as Luca and the Del Toro family – Carla played by Charlie Hoddell, Tony played by Nic Ash and their daughter Casilda played by Gemma Nelson.

There were some good accents on display – particularly from the Del Toro family members.

Thank Goodness! They've Taken Off Now was a nice duet between Luca and Casilda. Your Love Was Mine was sung and staged well.

On Taking The Boy I Brought Him Home was well performed by The Don with some strong backing vocals.

Carbonara's solo towards the end of the first Act was sung well.

In Act 2 the action moved to Berresi's Ice-Cream Parlour in New York and Our Family Is In A Mess made for an amusing start with the change into the big suit working well.

The highlight of the show was Dance A Cachuca, Fandango, Bolero!, some good choreography on display here from Jennifer Goodsell with excellent ensemble movement and dancing. A really catchy number and well performed – well done all.

Charlie Hoddell gave a good rendition of On The Day I Met Your Father.

Music was in the expert hands of Brian Steel and the band produced a good sound. I thought the overture was slightly underpowered – but otherwise excellent and the sound in general was good apart from some minor interference in Act 1.

Simon Banks produced an effective lighting design with some nice touches, in particular at the end of When He Was Young And Rather Rash during Act 1.

Your programme was again nicely produced with all the requisite information. Again I praise your page detailing shows from other local societies and will mention this at the next NODA regional meeting. If all groups reciprocated it would surely help everyone ?

A special note to the ensemble who worked hard throughout and contributed greatly to the success of the show.

There were a couple of points, mainly during Act 1, when I felt the dialogue could have been delivered with more pace, but was very impressed with the musical in general which kept the spirit of the original piece and music – but gave it a much more updated and funnier stamp.

As such, many congratulations are in order to Barry for all his hard work – I know how much work is involved in making relatively minor changes – so this has been a true labour of love and I wish him every luck in getting the piece staged elsewhere in the future.

Many thanks for the hospitality shown on the evening by your front of house staff and I wish you good luck with auditions and rehearsals for The Witches Of Eastwick which I look forward to seeing in October. I was impressed that you already had fliers available.