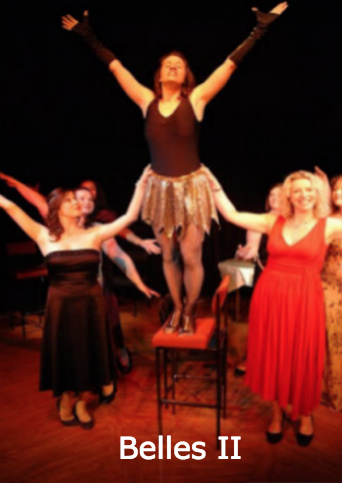 In the intimate Myers Studio

The Belles were back in town for their follow-up to last year's inaugural production – Belles II.

Director Charlie Hoddell again succeeded in attracting a talented cast who sang their way through a wide variety of songs. Charlie has developed a skill in mixing well known numbers with songs from lesser known musicals and it makes for an entertaining evening, it's always refreshing to hear new material as well as the better known numbers.

Crucially the length of the show was spot on, often compilations are too lengthy – and when there is no narrative or dialogue it's better to err on the side of quality rather than quantity.

We were introduced to this year's Belles troupe with the excellent Seasons Of Love from Rent which featured some strong harmony work and was a good choice for the opening number – this flowed into a couple of songs from The Scarlet Pimpernel – Storybook which was well performed by the company and then Monica showed good stage presence and expressions for her rendition of When I Look At You.

Love, I Hear was performed nicely by Anne and then one of the better known songs of the whole show, Show Me, sung strongly by Sarah – with just a little too much movement for my money.

There's A Fine, Fine Line from Avenue Q was well performed by Wendy who then teamed up with Anne for a very funny rendition of The More You Love Someone from the same show.

Who Will Love Me As I Am was sweetly sung by Amy and Monica and Anne and Wendy's Single Man Drought was excellent.

Victoria gave a very strong performance of the nice song Stars And Moons from Songs For A New World, the story was told very well through the song.

Equally as well performed, and very funny was Always A Bridesmaid from Wendy, and Love Is Always Lovely In The End was well staged and featured very funny performances from Anne and Victoria with a cameo performance from honorary Belles member Ian !

There was nice harmony work in Hear My Song and I enjoyed Sarah's performance of Chief Cook And Bottle Washer with some nice effects that worked well.

Amy gave a strong and moving rendition of My Brother Lived in San Francisco – staged very simply but very effectively for such a beautiful song.

Emily and Sarah put their tap shoes on to good effect for How The Other Half Lives, and Amy and Monica sang the challenging What Is This Feeling? from Wicked with panache.

The first act came to end with the title song from I Love You, You're Perfect, Now Change with some good strong harmony work and the black and white costumes looked particularly effective.

I loved the opening sequence to the second act which featured a charming sequence of numbers from the successful Broadway musical Little Women, based on novelist Louisa May Alcott's story of her own family of sisters growing up during and shortly after the American Civil War. The sequence was well staged and ran at a good pace – I enjoyed each of the numbers.

We Share Everything was another 'new' song for me – nicely performed by Anne and Monica and there was then Unexpected Song – well sung by Abigail and a teaser for her subsequent production of Tell Me On A Sunday.

Abigail, Emily and Sarah combined well for a strong and lively rendition of Three Little Maids which was followed by Victoria's superb interpretation of Alto's Lament which was so well acted and so funny – well done.

Emily and the Belles combined well with Show Off – another song from The Drowsy Chaperone and then I was done up like a kipper for What Kind Of Man? From Curtains. Yes, you well and truly did "rock the West End" (of Epsom !!) with this number. A perfect song to feature your NODA reviewer !!

The show finished on a high with For Now and Stumble Along and a lovely ending of Look At Me from your forthcoming production of The Witches Of Eastwick.

In all, a thoroughly enjoyable evening which I feel, on balance, improved on the high standards you set last year. I hope it was successful in raising funds and awareness for your October production of The Witches Of Eastwick.

Special mention and congratulations to your MD and pianist Cyn Lambert for playing such a wide repertoire so fluently and professionally.

The programme again included a challenging quiz which is a nice addition.

Finally, congratulations of course to Charlie for all her hard work in putting everything together so well in such a short space of time. Many thanks for the invitation and I look forward to seeing you all again soon.