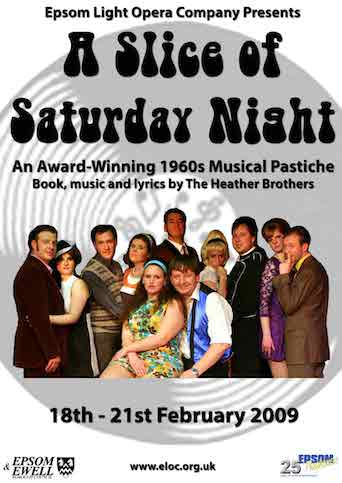 There's no hidden message or deep meaning in A Slice of Saturday Night. It's simply a compilation of tunes from the 1960s given new – some highly imaginative – lyrics strung together with minimal dialogue.

The story, as such, is basic. A number of teenage boys and girls descend on Club a Go-Go for their weekly rendezvous to eye and chat up the opposite sex. Times may have changed but the scenario hasn't.

This is a show that needs full commitment throughout. It was obvious from the start that all 10 in the main team meant to attack it for all it was worth.

The opening title number set the standard – excellent group singing and well-executed, simple movements to Tonia Porter's choreography. The next number Waiting was equally well harmonised by the five girls.

It is somewhat unfair to pick out individual performances in a show where everyone made a full contribution. Mention must, though, be made of Steve Green as Eric, the club's owner, keeping control of his unruly patrons yet finding time for a soft shoe routine in Eric's Gonna Keep Doing and to show the boys how to tell Lies.

Paul Featherstone and Wendy Halls teamed up to explain the heartache of being Seventeen. Danny Willis and Emily Evans were plausible Sonny and Cher look-alikes in Love On Our Side – their version of I Got You, Babe.

Ice Maiden Bridget (Vicki Stanbury) yearned for a Boy Of My Dreams but was, in fact, pursued only by Eddie (Toby Jones) - the thickest loser of the bunch.

Musical director Dennis Hooker, at the keyboard, had the perfect touch for each of almost 30 numbers.

Costumes helped create a feel for nostalgia, from brothel creeper shoes, narrow ties and cord jackets for the boys to Mary Quant-type dresses, false eyelashes and beehive hairstyles for the girls.

This was exactly the right show for today and the intimate Myers Studio was the ideal location.

Director Sarah Jones and her talented, hard working cast made sure the audience enjoyed every minute.