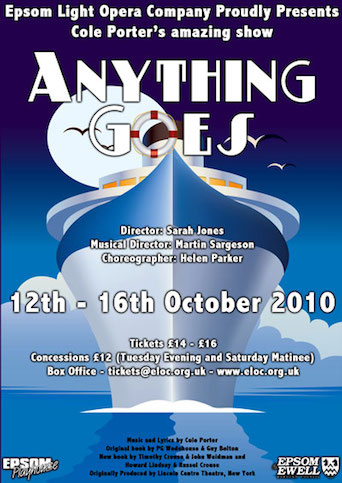 Music and Lyrics by Cole Porter

At the Epsom Playhouse
Autumn 2010

Anything Goes exists as a showcase for some of Cole Porter's enduringly popular tunes and witty lyrics (including contributions from PG Woodhouse), rather than for its near negligible plot. Any production relies heavily for its success on the interpretation of the key characters - some larger than life, other little more than two-dimensional.

ELOC's careful casting helped paper over the cracks in the story and after a slightly muted start and an noisy early scenery change (not masked by the orchestra) carried the audience along on a tide of feel good songs.

Lisa Scott brought out Reno Sweeny's rough-edged night club singer and sold the show-stopping Blow, Gabriel, Blow with conviction, accompanied perfectly by her four perfectly co-ordinated so-called Angels. This quartet also showcased with a tap routine in the title number, which displayed the full cast of forty at its best.

Reno teamed up attractively with easy-moving Darren Flick, Billy Crocker, for I Get a Kick Out of You. Billy though has his eyes only for Hope Harcourt. Charlie Dyer looked and acted every inch the rich debutante in this role and the two danced naturally together in It's Delighful, to Helen Parkers watchable choreography.

Steve Cox's gravely voice and personality gave Public Enemy No. 13 Moonface Martin a compelling presence. It was a strength of the show that he and his moll, Erma - Emily Evans in a perfectly pitched performance - sang in character throughout.

Steve Leitch, too, held his upper class twit persona when Lord Evelyn Oakleigh told of The Gypsy Within Me. Nic Ash kept just the right side of credibility as blustering Elisha Whitney downed one drink after another.

The siting of Musical Director Martin Sargeson and his band on the ship's bridge added to the on-board atmosphere as well as creating some well used extra space on stage.

Elizabeth Callow's costumes not only caught the mood of the early 1930's by the status of the mainly well-heeled passengers of the SS American.