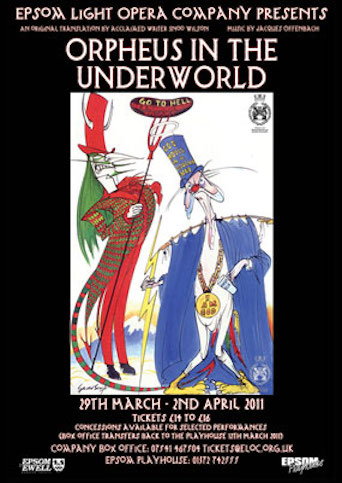 At the Epsom Playhouse
Spring 2011

Just over 150 years ago Offenbach wowed Paris with "Orphee aux Enfers" thus instigating a new genre of theatre, the operetta was born. Since then it has never it has never been off the stage. In this new translation by Snoo Wilson for ENO and with a bit of tweaking for ELOC he has given us this amazingly innovative 'Orpheus'.

Charlie Hoddell has taken this and reworked the old warhorse into a sparkling new production. A fantastic job, well done! Equally Dawn has choreographed with initiative and fun. Again well done!

This brings me to the cast. Sally as Eurydice was a delight to watch. She acted with vivacity and her singing was beautiful. She fully deserved her final curtain call. Richard as Orpheus is not an easy part as he always has to be a bit miserable, never seeming to get what he wants apart from teaching his pupil violinists. However he carried it off well in both his acting and singing. Chris had a whale of a time as Jupiter, he was able to run through all the gamut of emotions with enthusiasm and verve. Their seduction scene was excellent. Anthony as Pluto really enjoyed himself as the archetypal ravisher, a close second to Jupiter of course, and of course a sinner. Excellent acting and singing. What a joy for Heather to play Juno after 25 years in ELOC. She was very good, wonderfully cross and sang well. Kate as Venus and Jo as Diana played and sang their parts well. The challenge for Paul as Mercury was certainly a big one - movement-wise! He also sang well. What a nice bit of drag acting for Rick as Styx, didn't he enjoy himself and so did we, well done. Amaia as Public Opinion had a challenging role and she carried it off being suitably domineering and of course her singing was delightful. Mars, Nic, also enjoyed himself and played his role well. I loved Honey as Cupid, she acted and sang so well. John as Dr Morpheus was suitably of the medical profession and an Olympian Freudian father figure.

There were of course many other smaller parts, the Lictor and the Borough Councillors, all played well and added to our enjoyment. One mustn't forget the chorus, they were superb, each one with their own character whether they were Edwardians or gods and goddesses either in Olympus or Hades. Whenever one looked at the stage there was a picture and each performer had their own character. The sequences with the prams were magical! Dancers, what can I say? So much energy and expertise, Dawn worked you hard I am sure but the pizzazz and gusto you showed really paid off whether you were bees, love police or whatever (!) you were fantastic!

Scenery: there wasn't a lot, i.e. cloths etc. but it worked well, the cornfield was inspired! Each time the scenes were special in that so much was done with innovative lighting, Simon did a super job. The half tab in ACT II plus the lighting was excellent. Stage dressing and props were good, I loved the prams and the violins; the seating arrangements, settees, chairs etc. and the two doorways in Act I, were simple but effective. The scene changes were seamless, well done stage management. Some small pyrotechnics which combined with Richard Eliot's sound effects evoked our vision of Hades.

Costumes: these were 'out of this world' either in Olympus or Hades !! Such a variety in all the Acts, the Edwardians and nursemaids and the different chorus ones, especially the can-can dancers in all their different roles. I do have one small problem with Bacchus's costume, I would have preferred a bare chest and more ivy, the black 'dressing gown' didn't really strike the right note of Bacchanale note, I kept thinking of Titian's famous picture, Bacchus and Ariadne.

The orchestra under its able conductor Dennis Hooker was excellent and he'd obviously spent a great deal of time with the cast and it certainly showed. Well done indeed.

An informative and interesting programme, I much appreciated Gerald Scarfe's original design on the front cover. Sarah's welcome at front of house was first class. I was overwhelmed with your hospitality and the warm welcome at your President's night, I certainly didn't expect a supper, a fitting end to a delightful evening. A big thank you to one and all!