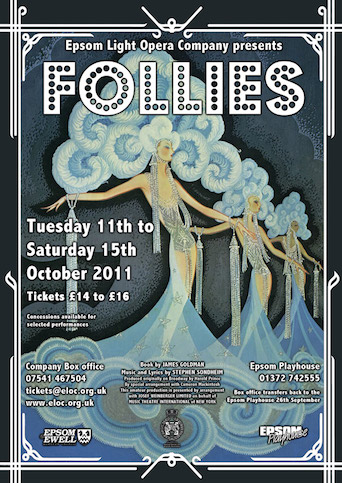 Music and Lyrics by Stephen Sondhiem
Book by James Goldman

At the Epsom Playhouse
Autumn 2011

Follies was born in 1965, but was not a success on Broadway. However that magical entrepreneur Cameron Mackintosh appeared and a totally revised Follies emerged in London in 1987 with a stellar cast including Julia Mackenzie, Daniel Massey and Eartha Kitt among others and I have to admit that I saw this show in1988 and was delighted to come to see the ELOC's performance.

Because Follies doesn't really have plot, apart from the fact that nostalgia looms large with "The Follies" theatre being demolished and the 'old' performers returning, four of them with complicated love lives, there is an opportunity for individuals to sing song 'standards' and they embrace it with all their might. Ben (Paul Falconer) and Buddy (Nic Ash) took full advantage of their duet, 'Waiting for the Girls'. Buddy in 'Buddy's Blues' and 'The Right Girl' was excellent. As was Ben in 'Too Many Mornings' Phyllis

(Lisa Rose-Michael) sang 'Could I Leave You?' with real panache and Sally (Monica Wallis) sang 'Losing My Mind' with great feeling. All four performed excellently well in their duos and composite numbers. The foursome who played the 'young' leads also performed well especially at the end in 'The Double Duet' They were of course Ben (Rick Qureshi), Phyllis (Charlie Dyer), Buddy (Russell Thompson) and Sally (Emily Evans)

So we come to Emily and Theodore (Kate Palmer and Paul Featherstone) in 'Rain on the Roof'' [the Pearl Carr and Teddy Johnston song in the 80s !] a good duet sung with enthusiasm. Solange (Sandra Zeffman) sang with great elan and was wonderfully French in 'Ah Paris'. Stella Deems (Julie Parker) in 'Who's That Woman', and her daughter mirroring her, was a delight. 'I'm Still Here' is such a famous song and (Lauren Fantham) as Carlotta sang it with great gusto and pizzazz. Heidi Schiller (Mary Dixon) the aging opera singer sang with just the right nostalgic feel. Hattie Walker (Lisa Scott) gave this standard - 'Broadway Baby' a real zing. Roscoe (Steve Cox) opened the show with 'Beautiful Girls' but he did not have the projection and punch that one needed and expected at the start of the show. Dmitri (Harry Wilkinson) and Kevin (Dean Robertson) acted well.

ELOCs dancers are always a delight, what a great spectacle they gave us and always lifted the show and the audience's spirits when they appeared! As always Dawn you work your magic with them and with the chorus and the principals. The chorus performed and acted well. The opening over the overture was perhaps a bit slow and a touch confusing. I preferred the Beautiful Girls as a start but that is a personal opinion. The set being minimal was just right and it was made good use of. A spectacular staircase. The costumes were magnificent and so correct for each character and the dancers. The orchestra under Nic's baton had a good sound, except that it was impossible to hear the dialogue when they were playing. This I know is a perennial problem especially when the brass instruments are present. (This wasn't just on the night I came as I spoke to others on who had come on other nights who said the same thing). The opening of the second half with 'Loveland' and the star cloth had a real show-biz touch!

Lastly but not of course not least congratulations to Laura for her direction; with such a complicated show she and all of you must have worked liked Trojans!

An informative programme, though I would have liked to have noted which person or persons were singing which number. On that theme have you considered putting your programme or poster into the NODA awards? Details are available on the web-site.

Thank you for the welcome for myself and my guest and for the hospitality and supper afterwards on Wednesday night.