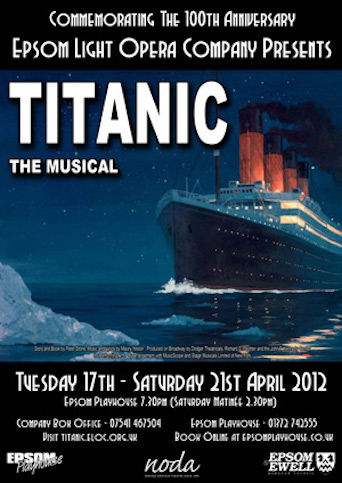 At the Epsom Playhouse
Spring 2012

This year the anniversary of the sinking has brought forth many television programmes. media stories and often new experiences, articles and letters in the newspapers regarding the Titanic when one would have thought there was really nothing new to say or write about. For example finally the name of the Duff Gordons, the couple who were vilified and accused of commandeering a lifeboat including bribery, has been cleared on the discovery of a box of letters. Because it was such a traumatic loss, all the media including of course the relatively 'new' wireless in 1912 provided coverage of the event as never before. The public at the time was both horrified and enthralled to hear about the largest liner on the high seas to flounder and sink to the ocean floor with its tremendous loss of life.

As recorded in your excellent programme, for which I warmly congratulate you, it was extremely interesting and informative. There have been both films and TV programmes about the sinking, its dramatization and in the process therefore sometimes giving new twists to the story. The Tony award winning piece by Peter Stone and Maury Yeston was a brave choice to tackle and ELOC are to be congratulated in attempting what would seem to be the impossible on the amateur stage, - however you certainly brought it off, AND my goodness in the very week of the anniversary of the sinking.

Now I understand that there were 54 people in the cast and you will appreciate that I can't mention you all! There were not only the main principals, but then the, if I may put it, the secondary principals and I am not speaking of 1st or 2nd class passengers or of the 3rd and the crew here, but of their participation in the story. I am therefore going to start with the chorus. The chorus entering gradually from stage right gave a great feel of authenticity to the imminent departure of the liner and its impact on them as they viewed its enormous size; the hoi polloi followed by the more affluent passengers. The distinction made by the costumes high-lighted the different 'classes' All through the production this was a key to the various dramas being played out in the 1st, 2nd, 3rd and crew scenes, the mannerisms, deportment and behaviour etc. The use of the auditorium staircases and the areas of the stage were well used. The final scene with the survivors in the Carpathia blankets was very evocative.

There was not a lot of scope for choreography, but Aimee gave us some spirited Irish dancing, as well as the rag sequence, the Damicos, Charlie and Andrew gave a great performances. The dance sequences certainly lightened the mood, for the audience that is, as all the while the inevitability of the drama was always present in our minds, knowing that the plans being made were going to be doomed to failure. A good use of the children in various scenes, though I did wonder about the handling of the baby! It should have been heavier and bulkier, there is an art in holding a baby!!
Captain Smith, a big role, tackled competently by Chris and yes, I was pleased to see the beard! He was authoritative and as always sang strongly and with fervour. A man obviously in charge and he looked the part. Thomas Andrews, played by Andy, a proud man, proud of his achievement as the designer of this leviathan but brought down low by the realization of its shortcomings in the final moments. A good actor and he sang well. His final scene was heart-breaking. Barrett, the stoker, a key role played by James who held the stage well and was a good contrast to the 'upper class passengers. He was a true person and a strong and moving singer, one really felt for his love for his sweetheart in England. (I bet he played poker in the crews' quarters!!) Another key role, the Wireless Operator, played by Rick, performed with authenticity, mostly sitting at the Marconi set, not easy but he did it. The final song was performed well as well as 'The Night was Alive'

Andrew as Fleet, the lookout, sang true and excellently in 'No Moon' and I wish him well in his new musical studies. A spirited Kate, played by Emily, livened up the stage with her rendering of 'Lady's Maid' along with the other Kates and the predominately Irish passengers all wanting a new and better life. They were all very evocative in 'The Staircase'. Isidor and Ida Strauss, played respectively by Tony Trott and Mary Dixson had us reaching for our handkerchiefs in the final scene. Their singing was superb and the acting was extremely emotive - stunning performances. 1st Officer Murdoch, Simon Nicol, another key role in the ship's wheelhouse and in control of the engine room played a strong character and his song 'To Be a Captain' was again very emotive as one knew he would never achieve his dream. Crispian playing Henry Etches the chief steward, was very much in control, acted with vigour and also sang well, The reprise was really emotive, (he'll really think twice before serving on any another craft, won't he?) Paul, playing Hartley had a vivacious and quite athletic role to play (how well I remember him as Mercury!) and he acted and sang with enthusiasm, I loved the'Rag' and 'Autumn' was a beautiful song. Lisa playing Alice Beane, 2nd Class, had a whale of a time , teasing her long-suffering husband and determinedly gate-crashing the upper class party. She played the role with gusto and sang well. Jim Farrell, Jon Ford, was a good foil to Kate and all the 3rd class passengers and showed us the contrast between the 'classes'.

Ismay, the Owner and all the other ship's officers and crew both above and below deck played their roles with care; they were those characters throughout the voyage. 3rd Class Alex Barnett was a delicious Bell-boy! I can see him playing leads later on! Then there were thirteen 1st class passengers, two other 2nd class and innumerable 2nd and 3rd class passengers all playing their parts in character and contributing to the 'feel' of the voyage.

As I mentioned earlier on the 'chorus' of all the classes was a delight. There were plenty of vignettes, to mention some: the boarding on stage right, the luggage stage left and the gangway. The ship's wheel and the Telegraph controls, the wireless room, the boiler room, the Smoking Room and the cabins' corridor, and finally the ship's rails and her listing superstructure at the end. A great deal of this was due to the scenery and props which were used appropriately and effectively. The indicator board giving the dates and times was also very effective, and what a boon it is for you to be able to fly scenery.

I repeat the costumes were superb as I have mentioned earlier; four costumiers involved and I have no doubt some from the cast themselves, well done! I do have one small niggle in that men tend to wear trousers on their hips nowadays, but all the men of that era would have worn them on their waists with braces. Trousers should 'break' with one fold on the instep.
The lighting was excellent. The sound effects were fantastic especially in the finale, and the bell alerting the engine room.
Of course there was a first-class orchestra under the direction of Dennis Hooker to play this evocative music; though I am afraid there was the usual problem of losing dialogue, and sometimes quite important dialogue over the sound of the orchestra, which was not at all their fault. James what a marathon task ELOC set you and how magnificently you rose to the occasion, well done indeed to you, Aimee, Dennis and the entire cast.

Thank you for inviting me and my guest and making us so welcome.

Comments from our Audience

"We have just come back from the theatre after the show. I cannot tell you how impressed we have been. As you know I have been involved in Am Dram since 1960 but your production tonight has surpassed all other amateur shows we have ever seen." - Pat and Peter

"Unbelievably Brilliant! You took me on the maiden voyage and I went down with the ship, it was extraordinary!" - Sally Nilsson, Great Grandaughter and Biographer of Robert Hichens.

"I've seen four shows in the West End recently, but your show was better than any of them!"

"One of the most moving experiences of my life"

James and Shelly passed me over their model of Titanic to build ready for the opening night of the show in two weeks, now I was an avid model builder as a youngster, but that was of aeroplanes, and somehow there were not as many parts as this!
Well the challenge has started as I don't want Andy Robson (Thomas Andrews) to be empty handed on his opening number...Tonight I painted the hull, but have run out as it needs two coats!

Well today I have had on and off help from Sophie, "Daddy, finding all those small bits is quite tricky you know!" came up quite a lot, but I think we have done well today. I resprayed the black area of the hull to neaten up the edge between the white and also the keel paint. Then set to work on the deck areas, here is a close up of some of the fine details: A line up of some of the deck areas before putting them into the hull, This is where I left it tonight, notice the detail in the small stair cases and cranes. really taking shape now...

Well today I have been painting and sticking more parts of the decks together, so many small pieces of railing, air vents and stairs, it really tricky, but pleased with the results today:

Only done about two hours of Titanic building this evening, completed the top deck and painted the lower halves of the funnels, if I get time tomorrow I would like to finish the funnels and get them installed on the deck with all the supporting lines.

Nearly there! Today I stuck on the funnels and then assembled the top layer onto the main model. Tomorrow I think will be the finishing touches.

Finished! Spent the afternoon putting the finishing touches to the model, the most fiddly bits were the strings holding up the crows nests and the signal cables, but the end result looks really good. Any person in row BB will see the detail when Andy Robson holds it up in the opening number, any row back from that will still see a great ship, but perhaps not the intricacies of the finished item: