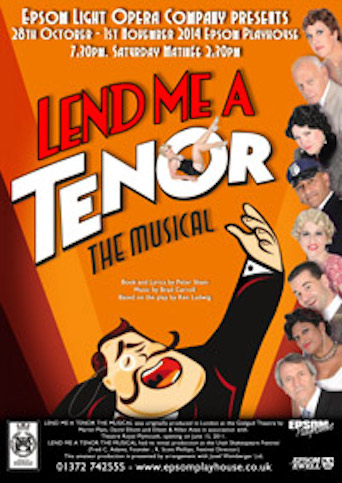 at the Epsom Playhouse
Autumn 2014

It is the biggest night in the history of the Cleveland Grand Opera Company. The world-famous tenor, Tito Merelli, "Il Stupendo," is to perform his greatest role, Otello, at the ten-year anniversary gala season opener. Henry Saunders, the opera's executive director, has high hopes that Merelli's performance will put Cleveland on the operatic map. However, at the final dress rehearsal of Otello, Merelli is nowhere to be found, Saunders is in a panic, and, along with Max Garber, Saunders's personal assistant, they scramble to figure out what to do ("Where the Hell Is Merelli?").

Meanwhile, Maggie Saunders, Henry's daughter, is making preparations for Merelli's arrival. She has transformed the neighboring Cleveland Hotel lobby (the place set for the gala reception) into a shrine to the opera star. Max enters and insists Maggie shouldn't get her hopes up, that Merelli might not show. Maggie believes otherwise and has additional plans concerning Merelli ("I Need a Fling").

Saunders rushes in and presses Max on an alternate plan. To make matters worse, they receive news that the President and Mrs. Roosevelt will be in attendance at the evening's gala. Desperately, Saunders turns to Max for an idea. Max, who fancies he is something of an opera singer himself, offers a solution ("How 'bout Me?"). In the middle of the song, Tito Merelli and his volatile wife, Maria, enter incognito. After the song Saunders and Max are told of the Merelli's arrival and rush to make them welcome.

Fifteen floors above, in the Cleveland Hotel's penthouse suite, the hotel staff makes final preparations for a royal welcome ("For the Love of Opera"). However, once the Merelli's arrive at their suite, it becomes painfully clear that Tito is in shaky shape to perform. He is suffering from a terrible stomachache and is at odds with his wife over his preoccupation with women. Maria storms off into the bedroom. Saunders exits to ready the opera company and guild for "Il Stupendo's performance. Tito enters the bedroom to comfort his wife, but his efforts are to no avail ("I Would Choose You All Over Again").

After yet another row with Maria, Tito returns to the sitting room. Now alone, Max and Tito share a drink and come together to form a common bond of admiration, friendship, and respect ("Be Youself"). Meanwhile, Tito's wife is busily composing a note resolving to leave her husband for good, and, when she finds Maggie hiding in the bedroom closet desperate to meet Tito, she angrily departs.

Soon, Tito, somewhat dazed after ingesting a triple dose of tranquilizers, which he has unwittingly mixed with a large amount of Chianti, finds Maria's note and threatens to kill himself. His tirade is finally calmed by Max who sings him tenderly to sleep with the notion that Maria will be "Back before You Know It."

Tito passes out, and when Max tries to rouse him, Tito appears to be lifeless. Max comes to the conclusion that Tito is dead! When Maria's "Dear John" letter is mistaken for a suicide note, Max and Saunders realize the company stands to lose $50,000 in ticket sales unless it can find a way for the "dead" singer to deliver the performance of his life ("Holy $#@!").

From here on, the play unfolds into a riotous and unpredictable explosion of mistaken identities and renewed love! Finally, at show's end, everyone is filled with a sense that they just might get the thing each of them desires, and that the Cleveland Grand Opera Company's future will be a bright one ("Lend Me a Tenor Reprise").

At a time when so many new musicals are based on popular movie titles, it is unusual to find one based on a play of the same name, but such is the case with Lend Me A Tenor – The Musical.

Lend Me A Tenor centres around the farcical happenings at the Cleveland Grand Opera Company. The company is presenting Otello, but their star tenor Merelli is late, the women of the Opera Guild are concerned the shrimp for the gala may have 'gone-off' in the heat, and the women of the company are giddy with excitement at the thought of the great star arriving. When the star takes one too many tranquilizers, company prompt Max is convinced to take on the part of Otello, pretending to be Merelli. Needless to say, hilarity ensues.

Epsom Light Opera Company opened their production of Lend Me A Tenor tonight at the Epsom Playhouse. The cast is lead by a talented group of principal players including Russell Hawkins (Max), Ian Lambert (Henry), Sally Hatton-Savage (Diana), Emily Evans (Maggie), Jeff Raggett (Merelli), and Lisa Scott (Maria). They are a uniformly strong group that play the comedy for full impact and handle the vocal demands of the score exceptionally well. I particularly enjoyed the work of Hawkins, Lambert and Raggett, the most unlikely bunch of Otellos ever to grave the stage.

The ELOC chorus were effective and sounded great in the few chorus scenes with some simple and effective dance routines. The creative team of Charlie Hoddell (Director), David Edwards (Musical Director) and Helen Parker (Choreographer) delivered a tight and very funny production that the audience certainly enjoyed.

The musicalisation of the play by Peter Sham and Brad Carroll is not a strong one. There are some great moments in the score, with numbers like How About Me?, Be Yourself, The Last Time and May I Have A Moment, and whilst these numbers work, its still Ludwig's original farce that shines through.

ELOC are to be praised for their decision to stage a show that did not have great commercial success. Lend Me A Tenor runs til 1st November and is certainly worth a visit if it's a good laugh you are craving.

This modern musical by Brad Carroll and Peter Sham is based on the 1986 play of the same name by Ken Ludwig. It ran for only a few weeks in the Gielgud Theatre in 2011 before it closed despite standing ovations and goodish reviews. Oh, the perils of professional theatre! Set in 1934, I found it a pleasant throwback to the days when musicals meant rattling good tunes, beautiful costumes, stunning dancing and a feel-good factor upon leaving after the show.

I must say from the outset I liked a great deal about this show and in particular the performance. The production team of Charlie Hoddell (Director), David Edwards (Musical Director) and Helen Parker (Choreographer) can and surely must feel rightly proud of what they produced on stage. David's firm control of his orchestra always supported, enhanced, but never overwhelmed the vocalists. Charlie's fertile stage imagination and ability to get the utmost from this enthusiastic company really turned this delightful show into a top notch production.

The plot revolves around the very late arrival of Tito Merelli, a world famous opera singer, who is then too unwell to perform and the necessity of finding a substitute to play the role of Otello in the opera of the same name, which was being put on by the Cleveland Grand Opera Company. Chaos ensues and opera director Henry Saunders, panicky because President and Mrs Roosevelt are attending that night's performance, expecting Merelli "Il Stupendo" to play Otello, hatches a plot with his assistant Max that he, Max, should play the part.

Meanwhile, Saunders' daughter Maggie lusts after Merelli and has transformed the Cleveland Hotel lobby into a shrine to Tito to welcome and impress him. Moreover, Merelli's volatile wife Maria arrives with him and much of the machinations that eventually resolve the complicated situation provide farce at its finest.

There were a host of wonderful performances from the cast as follows:-

Maggie Saunders .....Emily Evans .... Involved in the heart of the farce in the adjoining bedroom and timed beautifully. A rising star.

Diana Divane ...........Sally Hatton-Savage....Wonderfully charismatic and showed her staggering vocal range. An accomplished performer all round.

Anna No 1 Julie Parker } Acted together and provided much comedy
Anna No 2 Juliana Anderiesz } and good singing. All three Anna's were well
Anna No 3 Rebecca Cenamor } cast and enhanced the comedy.

The enthusiastic chorus with maids and bell boys gave full support to the talented principals. There was a good deal of energetic and the innovative dancing, including the tap routine, was polished to a professional standard. Take a bow Helen!

The upstage was cleverly used to show the hotel and its lobby, the backcloth also doubling up as "front stage" for the finale of the Otello "performance", great imaginative use of the set. The stage itself was dominated by adjoining bedrooms for much of the show and was well used with many entrances and exits, which in a farce such as this, requires absolutely perfect timing. It is to the director's and cast's great credit that it worked perfectly and greatly enhanced the show.

Costumes by Kris Benjamin were suitable for the period and well co-ordinated and made to fit by Hollie Barbury. There was very little not to like about this show. "Very little" is actually a euphemism for "nothing"!

Sue and I were warmly greeted and given a highly entertaining evening and I congratulate and thank the company.