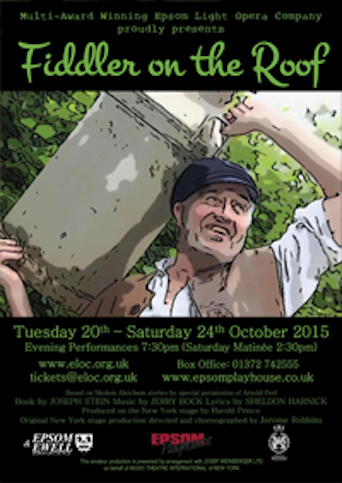 at the Epsom Playhouse
Autumn 2015

As the show begins, Tevye, a Jewish milkman, tells of the customs in the little Russian town of Anatevka. It is 1905, and life here is as precarious as a fiddler on the roof, yet, through their traditions, the villagers endure.

At Tevye's house, his wife, Golde, and their five daughters prepare for Sabbath dinner when Yente, the town's matchmaker, arrives. She tells Golde she has a possible match for Tzeitel, their eldest daughter. The girls speculate about whom they will marry someday, but Tzeitel says they must take whomever Yente arranges for them. Ironically, she has already secretly pledged her love to Motel Kamzoil, a tailor, who has yet to find the courage to ask Tevye for her hand.

As Tevye makes his deliveries around town, he prays, asking what harm there would be if he were a rich man. He meets and takes a liking to Perchik, a student from Kiev, and offers to hire him as a tutor for his youngest two daughters.
When Tevye returns home, Golde informs him that he is to meet Lazar Wolf, a wealthy butcher who is Tevye's age, following the Sabbath meal to discuss a proposal. Tevye believes Lazar Wolf wants to buy his milk cow, but soon discovers the proposal is that of marriage to Tzeitel. Though Tevye is not very fond of Lazar Wolf, he agrees knowing that his daughter will never starve. They celebrate with others from the village at the local tavern. On his way home, the Russian constable stops Tevye and warns him of an upcoming "demonstration."

The following day, Tzeitel and Motel plead with Tevye to rethink her marriage arrangement to Lazar Wolf, and to consider Motel instead. Tevye eventually agrees but how to break this news to Golde? He creates a story where Golde's grandmother and Lazar Wolf's late wife, Fruma-Sarah, appear to him in a dream and threaten to curse Tzeitel if she marries Lazar Wolf. Golde believes this is a sign and agrees to the match. Tzeitel and Motel are married in a traditional Jewish wedding ceremony, which is unfortunately disrupted by the constable's "demonstration."

Meanwhile, Tevye's second daughter, Hodel, has fallen in love with Perchik. They break tradition by telling Tevye they love each other and will be married, asking only for his blessing and not his permission. This causes Tevye and Golde to contemplate their own marriage and love for each other after twenty-five years. Perchik promises to send for Hodel and leaves for Kiev to work for the revolution. He is arrested and sent to prison in Siberia. Hodel decides she must go to him, a decision that her father eventually supports.

Weeks pass, and Tevye's third daughter, Chava has fallen in love with a Russian soldier named Fyedka. She pleads with her father to be allowed to marry him; but marrying outside the Jewish faith is unacceptable to him, and he forbids her to see him again. The next day, Chava and Fyedka secretly elope, and Chava is disowned by her family.
The trouble continues as the Russian constable tells all the Jewish villagers they must pack up and leave Anatevka within three days. Everyone prepares to leave as they reminisce about their miserable little town that so many have called home for so long. Chava and Fyedka come to say goodbye and make peace. Tevye refuses to look at her, but has Tzeitel wish her well before they all depart, the fiddler playing as they exit.

This emotional and iconic show based on the anti-Jewish pogroms in turn-of the century Czarist Russia has become one of the greatest musicals ever.

The director sensibly worked with very basic sets, Tevye's wooden house being wheeled on and off as required and other minimalist sets as necessary. Tevye's milk cart, a station platform, a sewing machine on a table, among the furniture on stage. The background was of a neutral sky and upright flats left and right framed the action.

The bleakness of the stage was surely to represent the very few possessions owned by Tevye and Golda's family. Their most precious possession was, of course, the family itself and the historic traditions of the Jewish people in Anatevka. It is the story of the lives of simple, uncomplicated folk set in 1905 Russia during the early days of the revolution with its stark contrast set against the time honoured traditions and relatively peaceful lives of the Jews living in the village.

The central character is Tevye, the milkman who supplies the village with its milk and cheese. He speaks regularly to God, puzzled as to why he should be so poor rather than a "rich man". Chris Evans as Tevye dominated the stage throughout and showed his huge stage presence and a sonorous, rich baritone singing voice. Monica Turnbull as Golda, his wife of 25 years, scolded and fretted to wonderful effect. She reminded him that though he was the Papa, she was, at the very least, his equal. The heady mix of love and frustration between these two marvellous performers underpinned this wonderful show.

A host of other talented performers added their talents to those of Chris and Monica. Emily Evans as the eldest daughter Tzeitel, in love with the penniless tailor Motel (Rick Qureshi) were both outstanding. Their love duet "Miracles of Miracles" was haunting and powerful.

The second daughter Hodel - Charlie Qureshi - did really well and the poignant "Far from the home I Love" was an emotional moment. She played opposite Daniel Crego-Bustelo as Perchik, the student. Daniel grew into his part after a rather underplayed beginning slightly lacking in attack.

Hannah Wade, as the third daughter Chava, defying Tevye by marrying outside her faith gave a moving performance opposite defiant Russian soldier Fyedka - Louis Tait - both forced to defy her father.

Julie Parker was the archetypal busybody matchmaker Yente fluttering throughout the show to splendid effect.

I greatly liked the dream sequence with marvellous cameos by both Caron Robson as Fruma-Sarah and also Sandra Zeffman as Grandma Tzeitel. The ghostly effects, lighting and costumes were extremely effective, though I thought the company's white half-face masks rather modern looking. Perhaps make-up would have given more realistic effect!

Keith Robertshaw brought just the right balance to the Constable, forced against his personal wishes to disrupt the wedding while avowing respect for Tevye and his peers. Len Martin was an amusing Rabbi played with a light touch.

The two younger daughters were prettily played by Jess Tuoha and Seraphina Palmer as Shprintze and Bielke respectively. Alex Land was the Fiddler on the roof, playing for real, a nice touch.

There was not a less than top class company scene from the opening "Tradition" to the closing exodus from "Anatevka"; the tingling "Sabbath Prayer", energetic "To Life", "Sunrise, Sunset", "Wedding Dance" - wonderful bottle dance included - "The Rumour", all totally realistic and extremely moving.

John Harries-Rees, the highly regarded and most experienced of directors had thoroughly understood this show. The emotion present throughout was skilfully heightened at every turn and the ending with the Fiddler in freeze was magical.

The music under Martin Sargeson was well handled and supportive, though a little too loud at points in the "Dream" sequence. Kathryn Peters choreographed the huge mixture of ages wonderfully well. Lighting designer Simon Banks added greatly to the success as too did sound under Richard Elliott. Costumes were good and realistic for the period.

All in all this was a top class show of which ELOC can be very proud.