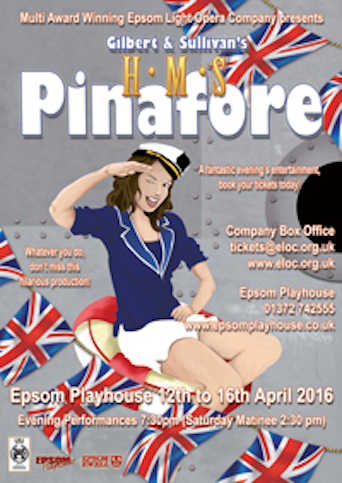 at the Epsom Playhouse
Spring 2016

HMS PINAFORE SYNOPSIS: The action takes place on the Quarterdeck of "H.M.S. Pinafore"

ACT ONE - Day
The Pinafore, a "saucy" beauty of a ship in Her Majesty's navy, is anchored in the harbour at Portsmouth. Its proud sailors are busy scrubbing the decks for the expected arrival of Sir Joseph Porter, K.C.B., Britain's First Lord of the Admiralty. "Little Buttercup", a bumboat woman comes aboard to sell to the sailors her stock of "snuff and tobaccy but none of it's wacky" and other luxuries. A handsome seaman, Ralph, tells his messmates that he is in love with the Captain's daughter, Josephine. Dick Deadeye, the embodiment of the ugly truth, reminds the starry-eyed mariner that Captain's daughters don't marry 'common' sailors! The Captain arrives to inspect his crew and tells them that he never uses foul language and is never sick at sea...well, "hardly ever."

Josephine is sought in marriage by Sir Joseph, but it seems that she has no enthusiasm for a union with the cabinet minister - secretly, she is in love with Ralph. It also seems that Little Buttercup has a romantic interest in the Captain and harbours a secret about Ralph!

Finally, Sir Joseph arrives, attended by his many "sisters, cousins and aunts," among whom is his loyal but jealous Cousin Hebe. He explains that he rose to the top post in the Navy by sticking close to his desk and never going to sea. He also encourages the Captain to request that his sailors follow an order with the phrase "if you please." After all, his Lordship notes, "a British sailor is any man's equal." Indeed, he presents the crew with a song that he himself has composed to encourage "independence of thought and action in the lower branches" of the Navy. Sir Joseph and the Captain retire to discuss the proposed marriage.

Ralph finds Josephine alone on deck and declares his love for her and his willingness to try to fit in with middle- class society. She rejects his proffered love, although his simple eloquence goes to her heart. She is a dutiful daughter and cannot forget the disparity in their ranks. But when Ralph threatens suicide, the lady relents and declares her love for him. With the crew and the relatives assisting, the lovers plot to elope that very night. Dick Deadeye warns the pair of the impropriety of their plan, but he is thrown off the ship.

ACT TWO - Night
Captain Corcoran is alone on deck with his mandolin and sings to the moon of his troubles. Little Buttercup comes to him and reveals her affection. He tells her that because of his rank he can never be more to her than a friend; but she hints darkly that a change is in store for him, and "things are seldom what they seem."
Sir Joseph returns, complaining that Josephine does not favour his suit. The Captain comforts him by theorising that she is dazzled by his lofty station and suggests that he plead his cause on the ground that "love levels all ranks". When Josephine hears this argument, she considers how eloquently Sir Joseph has stated the justification for her to marry Ralph!

Dick Deadeye finds the Captain alone and reveals the planned elopement. He and the Captain lie in wait for the crew. The Captain confronts the elopers and is so exasperated that he actually swears a foul oath, "Damme!", which is overheard by Sir Joseph. Judging first and asking questions later, Sir Joseph orders the Captain to go to his cabin for this "ill-advised asperity."

Upon inquiry, Sir Joseph finds out that Ralph and Josephine love one another and orders the "presumptuous" sailor to the brig. Affairs are interrupted by Little Buttercup, who discloses her long-concealed secret: as their foster mother, she had exchanged the Captain and Ralph while they were both babies. By accident, of course. Sir Joseph immediately sends for Ralph (who is now Captain) and the Captain (who is now a 'common sailor'). Since it is "out of the question" for Sir Joseph to marry the daughter of a mere sailor, his Lordship nobly consents to the marriage of Ralph and Josephine. The former Captain is now free to marry dear Little Buttercup, and Sir Joseph agrees to marry his long-time admirer, cousin Hebe. All ends with "joy and rapture unforeseen," for "he is an Englishman!"

Having performed in and directed over 100 Gilbert and Sullivan shows including this one, I know the repertoire rather well. To be honest, HMS Pinafore is not even among my top ten as I find the plot unconvincing and the humour forced in places. I therefore took my seat with a heavy heart to review this show - and then Damascus!! All those stodgy D'Oyle Carte productions and tedious amateur ones including many in which I have appeared - Gone!! Just like that.

The "magical" director James Fortune - a member of the Inner magic Circle - sprinkled a ship load of magic dust all over this seminal production. It was, in essence, a new show with some familiar characters and melodies, and I simply loved it! WS Gilbert was the most topical of writers and men ..... "No telephone communicates with his cell" (1878). But Gilbert was soon to install the new telephone in his home and in the Savoy Theatre, so what better than a "cell" phone in this age of technology. "Rafe" became "Ralph" (except to Dick Deadeye) and then, upon his demotion, back to "Rafe" again. Hebe became a Lady Jane type ("Patience") complete with several "crushed" and "crushed again". This much enlarged part was forcefully played by Charlie Hoddell and was hugely enoyable.

There was a running gag where Sir Joseph called Captain Corcoran every name under the sun beginning with "C" save the correct one. Around 15% of all the dialogue was not from Gilbert, but was instead modernised, usually humourously. Two sailors were drummed upon stage before the show properly began to sing an amusing ditty asking the audience to turn off their 'phones. There was ships rigging in the balcony of the theatre where we first observed Ralph Rackstraw, who was sensibly cast a little older than usual to look at least closer to the captain's age. This age problem is to my mind an obstacle HMS Pinafore can never truly overcome.

The essential class system plot was faithfully maintained however, despite Sir Joseph letting his hair down and throwing bottles / glasses in the "Never mind ...." trio, together with Josephine and Captain "Corkscrew". These were neatly caught by the attentive crew. All G&S operas are of their time, but to survive in the modern world and, crucially, to attract younger people both in cast and audiences, they must be relevant to today's world. I loved the two naughty sailors, Helen Ash and Daniel Crego-Bustelo. They had attitude aplenty and revelled in it.

We were treated to a professional singer playing Josephine. The beautiful tones of Honey Rouhani lit up the stage, acting and flirting deliciously. A rare treat!

Little Buttercup - Lisa Scott - was larger than life, charismatically and sympathetically played. Nic Ash as Captain Corcoran, Corkscrew, Cauliflower etc. became Captain "Cor blimey" upon his demotion and was a marvellous foil to the madcap Sir Joseph of Chris Evans. Chris had much of the humour in this version, including wonderful non-Gilbertian lines. He appeared on deck wearing a pink rubber ring and dominated the stage throughout.

James Turnbull was another top quality performer as Ralph Rackstraw. His duet "Refrain audatious Tar" with Josephine was special, as was his speech ending "I hope I make myself clear, lady" .

Dilip Patel was the villain Dick Deadeye, appearing "magically" downstage left and whispering urgently to the captain. Dilip was one of the best Deadeye's I have seen, which are many in number. He sang his song from Princess Ida brilliantly - a most "disagreeable man". This is said to be based upon W.S. Gilbert himself who, though he was certainly often disagreeable, not least to Richard D'Oyly Carte himself, was much loved by his company for his many kindnesses to the chorus. History has slightly misrepresented Gilbert as a person.

Chris Haslett was a fine boatswain, singing his song "He is an Englishman" with fervour. Len Martin also did well as his Mate. Emily Evans was entirely typical of this sparkling production as a winning Midshipmite.

The chorus were fully supportive of these special principals, dancing energetically with some excellent costumes by Costume Workshop, who supply the Harrogate Festival. I particularly liked the Drunken Tappers.

Yet another innovation was the sound and lighting effects when the Captain was being taught to dance a hornpipe on his table by Sir Joseph. The Ruddigore patter trio worked well too and all three parts could be heard. The singing throughout the whole show was of top order!!

The band under the sure command of Musical Director David Edwards was always supportive, never overpowering the singing, giving full vent to Sullivan's genius. It also had the required pace - many amateur companies take G&S too slowly, spoiling the beauty - not so here, thanks goodness.

Choreographer Amy Astley had clearly driven a dedicated company into giving their very best in her sparkling dance routines. The company movements were crisp and polished. The "Catherine Wheel" sailor effect was superbly carried out.

A special mention must be made of the superb set, one of the best I have ever seen on the amateur stage. The ship was entirely realistic looking, though the programme credited no-one especially responsible. Whoever designed it and built it deserves great credit. Perhaps it was brought in from a professional set hire company?

The evening ended with the superb Josephine, Buttercup and Hebe leading the whole company in "Rule Brittania". Rule ELOC would be more appropriate.